We talked to Dr Julia Botsford about the questions and issues that cultural and ethnic differences can raise in the provision of support. 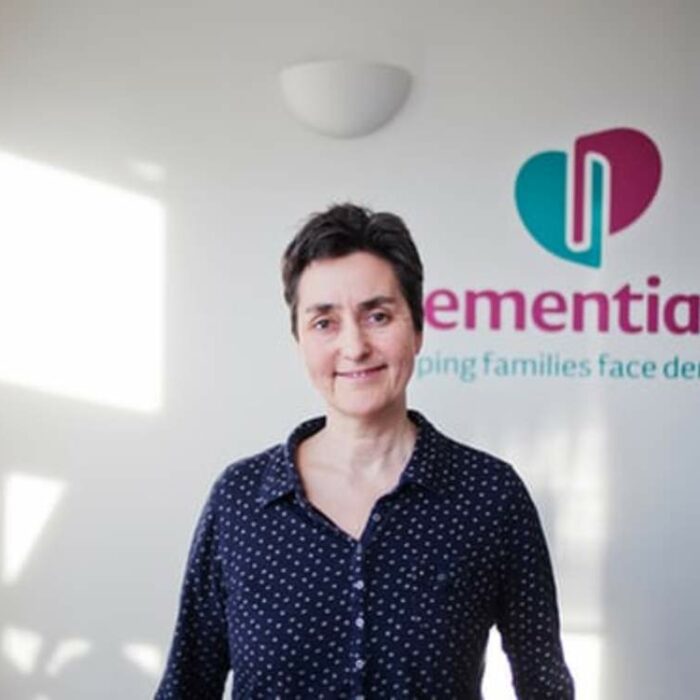 Dr Julia Botsford is a specialist in the area of dementia in black and Asian minority (BAME) communities– and the editor, along with Karen Harrison Dening, of the book Dementia, Culture and Ethnicity: Issue for All? We talked to her about the questions and issues that cultural and ethnic differences can raise in the provision of support and the creation of services for those living with dementia and their families.

What inspired you to put together the book, Dementia, Culture and Ethnicity: Issues for All?

I currently work for Dementia UK in research and evaluation, supporting specialist Admiral Nurses across the country working with people living with dementia and their families. Prior to that, before I retired from the NHS, I was working as an Admiral Nurse myself in north London.

Because it was a multicultural area, I developed an interest in working across ethnicities, and I was given the opportunity to study for a doctorate on the experience of families, and specifically partners, of people living with dementia.

I looked particularly at African Caribbean and Greek Cypriot families who were going through those experiences – and that led on to me being in a position to produce the book.

Is the experience of ethnicity and dementia something that is lacking in research and awareness?

It is, but it’s improving – certainly, when I started my doctorate in 2007 there was little published in the UK about the topic, and a lot of it was anecdotal, just people talking about the difficulties they were experiencing.

The issue of dementia, in general, has become much more high profile since then though, and there’s much more awareness. Within that, I think there’s increasing acknowledgement that people’s experiences of dementia will be impacted on by their culture and ethnicity, coupled with the fact that there is a growing population of older people in the UK from different backgrounds. That has led to a sense that something that needs to happen around addressing possible differences in need.

There’s a projected eight-fold increase in the number of people from BAME communities developing dementia between now and 2051 which has implications for policy and the way services are delivered.

Who is the book written for – and why?

It’s quite eclectic, with sections that would be accessible for people who are researchers, people working in the area and those generally interested in ethnicity issues or dementia.

There are sections where we talked to family carers from a range of different backgrounds who described their own experiences on a personal level. Along with that, we included a lot of information about associated statistics and practical sections, such as working with interpreters, for example.

And there are also examples in the book of where health and social care professionals and those in the voluntary sector have developed specific projects to promote awareness or positive ways of engaging with people from specific communities – and give their reflections on what worked well and what to think about for other people to learn from.

Why has dementia been so predominantly ‘white’, in its presentation in the mainstream dialogue?

Mainstream services have grown out of what currently exists – and because of the nature of dementia, which tends to affect people as they grow older, and the result of migration patterns from the 1960s on, there have historically been fewer older people from minority ethnicities in the UK.

There is a projected eight-fold increase in the number of people from black and minority communities developing dementia between now and 2051, though, with only a two-fold increase generally in people with dementia from all backgrounds. This obviously has implications for policy and the way services are delivered, and it’s an issue that’s going to become more and more relevant as the next generations age.

Are there any key differences between the way that dementia is perceived or experienced in ethnic minority communities?

I would say, though, that there is evidence of potentially different prevalence rates for different types of dementia in South Asian and Caribbean communities. We don’t quite know why that would be, but issues such as higher rates of diabetes and high blood pressure are likely to be a part of that.

There can also be a difference in attitudes, and evidence that some minority communities tend to access services later – or not at all. And finally there can be issues about how people perceive the symptoms of dementia in some communities, so they may view dementia as just being part of ‘normal ageing’.

It’s well documented, for example, that some South Asian groups don’t even have a word for dementia in their language. There could also be a stigma and a sense of shame leading to not wanting to let people know what’s happening. I’ve been told that in some cases, people feel uncomfortable talking about it because they are concerned that it might affect the marriage prospects of people in the family.

On an individual level, if you’re a first-generation immigrant, whose younger life was in rural India, for example, and you develop dementia in old age your cultural reference points are likely to be very different to the ones in your immediate surroundings.

Dr Julia Botsford works for Dementia UK in research and evaluation, supporting Admiral Nurses who specialise in working with people living with dementia and their families. Check out their website at https://www.dementiauk.org/

For more information and guidance videos on Black and Minority Ethnic (BME) Communities and Dementia, check out the Social Care Institute for Excellence website.

There’s an example in the book where somebody is talking about their mother-in-law whose family took her to live in their home when she developed dementia. They understood that when she spat out her grape seeds she was not seeing the carpet but the mud floor of her earlier home.

We also need to consider the issue of language – children who have been to school in this country don’t necessarily speak the original language of the familial person who came here in the first place. So the older person with dementia may not actually even speak the same language as the people around them, which is another challenging dimension that we forget.

One of your chapters is entitled: ‘Working positively with culture, ethnicity and dementia’. What does that mean to you?

There’s an idea of ‘cultural competence’ in dementia services, where professionals are aware of their own identity and how they might be perceived, but come with an open mind to whoever they come into contact with. It is definitely useful to know key aspects of particular cultures, but it’s more important to be open to the individual, basically.

Increasing numbers of courses on dementia address this and the reality is if you’re working in a person-centred way, which is what most dementia services aim to do, it will always include taking into account the culture of the people that you’re working with. We do need to do more on this though.

One of the things that I’m conscious of at the moment is that if organisations know the kinds of cultural backgrounds of the individuals who they’re potentially going to be providing services to then they will be able to discover and monitor how well they are reaching those communities.

It certainly appears some communities are less likely to access services, as I mentioned, and if they do, then it’s later on, perhaps when they are in crisis. At the policy level, we should be addressing these needs and certainly reach out to communities to avoid this.

How can services do that effectively? Would one way to be to attract more dementia nurses from different ethnic backgrounds?

That’s one way, although again, it’s a multi-layered issue. One of the things I wrote about in the book is the challenge of being an ‘insider’ or an ‘outsider’. Nursing in the UK is quite a multicultural community in itself, but you might find that, for example, a carer or a nurse might be from one minority community while the care recipient might be from a different community.

Acknowledging the nuances of ethnicity and culture and the issues that come with these is crucial to creating the right kind of support for people. The answer is not about the lumping together of BAME, which often happens – we shortcut by making it a dichotomy between majority and minority, which is far too simplistic.

Dementia, Culture and Ethnicity: Issues for All edited by Julia Botsford and Karen Harrison Dening is available from Amazon UK.

Dementia Care: How Celebrities Are Putting Dementia in the Spotlight

With the Alzheimer’s Society launching its United Against Dementia celebrity campaign, we look at the impact that high-profile people living with dementia can have in challenging the stigma and improving public understanding of the condition.

Penny Garner’s observations of her mother and the way she processed and linked information become the basis for the development of the SPECAL method – a person-centered method of managing dementia and promoting wellbeing. Today, she trains and raises awareness about the method through the Contented Dementia Trust and the Sunday Times bestselling book Contented Dementia. We talk to her about her unique work…