Penny Garner’s observations of her mother and the way she processed and linked information become the basis for the development of the SPECAL method. 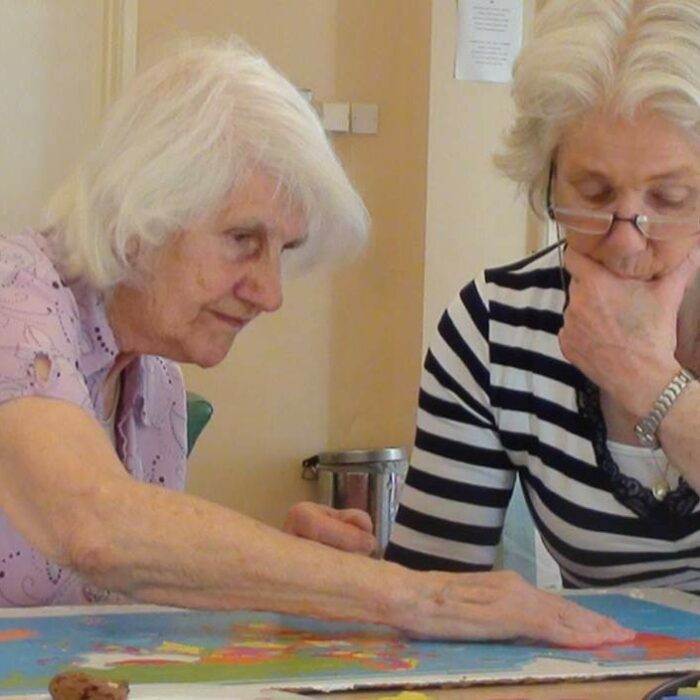 Penny Garner’s observations of her mother and the way she processed and linked information become the basis for the development of the SPECAL method – a person-centered method of managing dementia and promoting wellbeing. Today, she trains and raises awareness about the method through the Contented Dementia Trust and the Sunday Times bestselling book, Contented Dementia. We talk to her about her unique work…

How did the SPECAL method come about?

The SPECAL method came from 10 years of listening carefully to my mother, who had dementia. I wasn’t the main carer – that was my father – but that actually meant that I could observe her very closely without being exhausted.

While living with dementia she made some extraordinary, and informative statements. For example, once we were sitting in a doctor’s surgery talking about shopping, and she turned to me and suddenly said: “has our flight been called yet?” What did she mean? It meant that she had not stored information on why we were there in the moment.

In normal life, if we connect each moment to the next as we transition though time. If you have dementia you don’t have unbroken access to information about what has just been happening moments before, so you cannot do that in the same way.

When my mother developed dementia she didn’t lose her reason, or her need to reason, but the most recent facts that we all take for granted to use to reason with weren’t there for her.

She had the feeling of what had been happening but not the facts. In the case of the doctor’s waiting room, she had tracked back to older experiences from earlier in her life to make an intelligent match with what was happening in the present.

What do you need to know about dementia to use the SPECAL method?

If you think in terms of ‘storage and retrieval’ of facts and feelings, rather than ‘remembering and forgetting’, it makes it much easier to explain what is happening for the person with dementia and to understand how best to help rather than hinder the person with the disability.

The person with dementia is definitely the expert. My mother’s statements informed me a lot, and by working with them, I then found in a curious way that she never changed, even with dementia.

It’s reductionist, but in managing dementia it helps if you understand that the only difference between yourself and the person with dementia is that if you stop talking they won’t necessarily have a coherent factual record of what you’ve just been saying.

Seen from their point of view, if they’re deprived of that immediate recollection, it’s a very sensible thing to track further back to something that makes sense with what they’re seeing or hearing.

We use the simple analogy of a photograph album to represent the memory system, with the ‘photographs’ representing the individual memories – these are the cues. Without dementia, the ‘photographs’ we store contain with both facts and feelings. With dementia, we store all the feelings but not necessarily all the facts of what has just been happening.

How important is it to respect the person’s ‘album’ rather than argue about which ‘photographs’ they choose to use?

My father was a medical man and if my mother got anything ‘wrong’ he would automatically correct her. At the same time, we had a friend who would come in and help, Gladys – she had known my parents a long time.

When my mother became unwell with dementia – what I now think of as a disability – Gladys went on behaving toward her exactly as she always had. She never questioned her, just accepted what she said and worked around it.

Watching from the wings, I saw that when my father corrected my mother she would go as white as a sheet and look utterly lost. With Gladys, my mother was the same as she had always been. It was clearly something to do with external factors. At the time, with no more knowledge than that, I decided Gladys’ way of approaching my mother represented the way forward.

No one likes being contradicted, but if we don’t have dementia we do at least know what we’re being contradicted about. The person with dementia may not have stored recent facts and therefore cannot possibly recall them, so contradiction just provides them with a negative feeling with no idea what has caused it in the first place.

How did you develop the SPECAL method from these observations?

I was given a tip by my father’s junior partner, another GP, who told me to study the movement of a crab: crabs move sideways to move forward – and that has informed me ever since. By the time my mother died she had provided me with a blueprint for the way her mind was now working – although I had no idea whether it would apply to anyone else.

I started working as a volunteer at a nursing development unit in Burford, Oxfordshire, in 1990, where they were introducing a dementia day-care service. I started to use what I’d learned from my mother and found it worked for every person with dementia that I met from then on. Between 1990 and 2000, working with hundreds of patients, I completed the development of the SPECAL method.

Remembering and forgetting’ are hopelessly incomplete words in the context of dementia. Storage and retrieval are better.

The book Contented Dementia came out in 2008 – how did this change things for you?

Oliver James, my son-in-law wrote the book “Contented Dementia”, and when it was released, it leapt into the top 10 on the Sunday Times Bestseller list. It has its critics, but on the whole, it is a page turner. Mainly, I think because it stacks up, and what he has written about actually works.

If you approach the SPECAL method with an open mind, there is nothing to argue with, especially if you are a person who is spending time with a person with dementia or a 24-7 carer and can try it out for yourself at first hand.

The book title alone is arresting – and a radical statement – because how can that possibly be? People say ‘I have never heard those two words put together before’. But it actually does mean what it says – and with SPECAL the contentment is sustainable – 24 hours a day, every day, for life.

As a method SPECAL is counter-intuitive. It seems to me that dementia is the only area in life where common sense simply doesn’t work. If the method is controversial with some, it’s mainly because they haven’t grasped the implications of its foundation, the ‘SPECAL Photograph Album’ If you don’t understand what that is all about, then how are you going to work out what to do about it?

Can anyone use the SPECAL method?

The general principles, which come from the SPECAL Photograph Album and are known as the Three Golden Rules and can be applied by any carer, whether family, friend or professional. They will make an immediate difference to the quality of life of everyone concerned. The care model is a family led and uses their knowledge of the person to develop an individualised profile.

Once that profile has been developed by the family, any professional carer with only a basic knowledge of SPECAL’s core principles can deliver the care and sustain well-being.

The person with dementia will give you insight into what’s going on in their mind. They will talk about what they think – and they can only think about what is in their album. Therefore, when they speak it is gold dust.

They are telling you what is important to them. If you can record it in a systematic way you can piece the cues to their past together using simple SPECAL tools, and patterns start to emerge so you can make your own matches. The important thing is that you don’t contradict them in the present. Don’t argue with the ‘photographs’ they choose to use – start where they are at and go from there.

Importantly, SPECAL should not be confused with reminiscence therapy. We learn from the expert, the person with dementia, what old facts work well for them in making sense of their daily life.

We follow their lead and use their past to make practical links with the activities of daily living, as they move from moment to moment in the present. This is not about marooning someone in the past, but about enabling people to live as close an approximation of the life as they would have had without dementia.

What is your aim with the SPECAL method?

Family carers we’ve worked with say that the SPECAL method is the best-kept secret in dementia care. But we don’t want this be the case and must address the lack of scientific validation.

Dementia is a condition owned by the medical profession, and the evidence that the SPECAL method works is anecdotal at the moment – we’ve got filing cabinets of testimonies.

However, we’ve recently been approached by King’s College London to research the efficacy of the SPECAL approach, which is a big step forward.

Visitors who come to observe our Friday Group at Burford where we are using the method with people at all stages of dementia, including late stage, repeatedly tell us they can’t tell who has dementia and who has not. For me, that is the start of our ‘evidence’. I am absolutely committed to showing the world that living with dementia can go hand-in-hand with well-being.

Find out more about Contented Dementia Trust and their work here.

With 3 in 5 people living with dementia getting lost while walking every year we explore the issue of safer walking technology and look at the latest devices designed to give independence to them and peace of mind to you.

Living with Young Onset Dementia: An Interview with Peter Berry

Peter Berry lives with early onset dementia, a form that appears before the age of 65. A passionate advocate for living well with dementia, Peter works with Young Dementia UK to raise awareness of the condition.