Dementia and Depression in Later Life

Professor John O’Brien’s work at Cambridge University discusses Dementia and how early biological changes may one day help us to predict, track and treat those at risk. 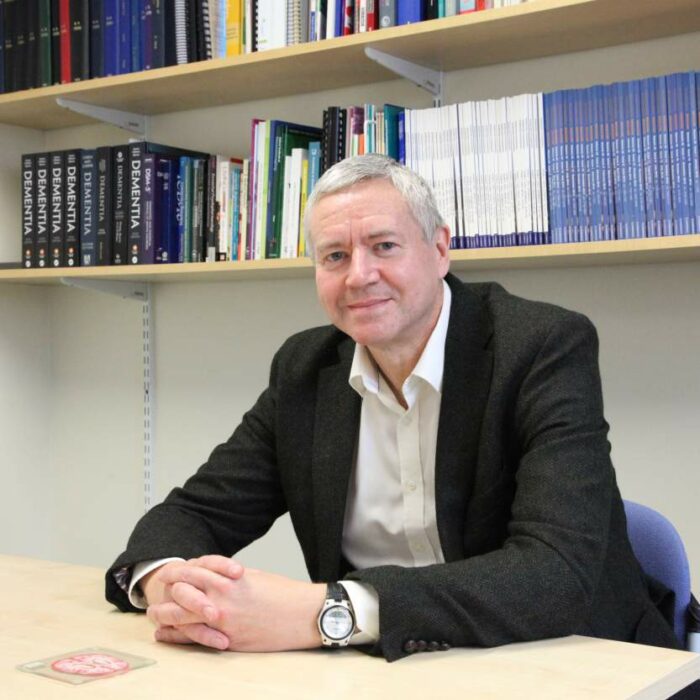 A Professor in the Department of Psychiatry at the University of Cambridge, Professor John O’Brien’s interests include dementia and later life depression. His work focuses on the role of ‘biomarkers’ in predicting and diagnosing dementia, and how vascular and inflammatory factors may precipitate and affect depression in later-life. We talked to him about the progress being made in understanding depression from a biological perspective and the potential to possibly predict – and treat – those at risk of dementia years before they show symptoms.

Why are you particularly interested in dementia and later life depression?

I first became interested in dementia and later-life depression during my psychiatric training – when I became aware of the clinical needs of both conditions and the relative lack of understanding about the causes and treatments. So as I developed my research career, I made both dementia and depression the focus of my attention, to try and help move things forward.

There are a lot of relationships between the two. To start with, they’re the two most common psychiatric disorders in later life. They can often be mistaken for each other, so people with depression can sometimes be thought to have early dementia, and people with dementia frequently have depression.

And there are also some similarities in the brain changes involved with both. For example, in later-life depression we see vascular changes, that is changes relating to the circulation/blood flow, such as mini-strokes, in the brain – and of course, vascular dementia is also caused by vascular problems in the brain.

What is a biomarker and what role does it play in the understanding of dementia?

A biomarker is something you can measure, whether in blood or in the brain, or even a cognitive test, that bears a relationship to an underlying biological change relevant to that particular illness. So you can have biomarkers of dementia, but you could also have biomarkers of depression as well.

Our interest in biomarkers is around whether we can use them to identify early changes and therefore people prone to a particular illness. Secondly, can we identify biomarker changes to help us track the disease, and finally, are we able to find biomarker changes that tell us something new about the illness we’re looking at, which might then lead to improved treatments.

Inflammation is also an increasing focus in both dementia and later life depression, and part of the work we’ve been doing is to see whether it is actually a biomarker for these in blood and in brain scans.

We know…that increases in amyloid [in the brain] don’t just happen at the time people develop dementia or even a few years before; they happen 10, 20 or even 30 years earlier.

Would biomarkers identify people at risk who haven’t shown any signs of dementia?

There’s increasing interest in biomarkers that might be either predictors of dementia or very early changes. One example is Alzheimer’s disease, where part of the change in the brain that happens is around the increased levels of a protein called amyloid laid down in the form of amyloid plaques.

We know that these increases in amyloid don’t just happen at the time people develop dementia or even a few years before; they happen 10, 20 or even 30 years earlier. So you could say those changes are predictive of people who will develop Alzheimer’s disease in the future.

What are the implications of being able to predict who is at risk of developing dementia?

What we’ve learned over the last 10 years or so is that because there is a gap between the start of the disease process of amyloid being laid down and actually developing dementia, there is a large window in which we can now think about doing studies and interventions – and in a different way to how we have done in the past.

So, it might not be as simple as finding a drug that you take at the time you notice symptoms, it might be more around altering lifestyle, behaviour or factors in middle life, to stop us getting Alzheimer’s disease – and other dementias – in later life.

If dementia changes are found in the brain, could it be possible to reverse them or to hold them off without medication, in any meaningful way?

At the moment we don’t know how to do that, although that’s obviously the aim. However, some studies done using immunotherapy or a vaccine against amyloid, have actually shown that it’s possible not only to stop the amyloid accumulating but help reduce it over time.

So it’s not impossible that we could actually reverse the process, but the difficulty is that by the time you’ve got amyloid build up and the clinical symptoms of dementia, there’s already been an awful lot of brain changes. So that reverse of amyloid would have to happen at a much earlier stage when people don’t really have symptoms, and before significant brain damage has occurred.

Can you see a time that people would just get tests as a matter of course so that we could reverse or halt any changes early on?

That would be the ideal; simple tests that you could give to people that would show a risk of future dementia. We can’t yet do that for blood tests though, although that’s likely to come – at the moment we have to measure amyloid levels through a Positron Emission Tomography (PET) brain scan or a lumbar puncture.

That future ‘simple test’ could then be combined with a treatment aimed at stabilising or lowering high or increasing amyloid levels, which again, would have to be fairly simple if it’s going to be given at scale to large numbers of people.

There is a lot of work being done on things such as more accurate types of scanning and cheaper forms of brain imaging. It’s likely that changes will be incremental rather than sudden, but progress is certainly being made.

It’s difficult to predict any sort of time frame, but the vision I’m talking about is not something that’s going to be achieved in the next few years. It’s more like 10 to 15 years away.

Your research also looks at depression in later life: what types are there?

The classification of depression is most commonly either bipolar disorder, where you have swings of high and low mood (mania and depression), or the more common form, unipolar depression, where you just have episodes of depression or low mood.

Your work also looks at ‘vascular inflammatory factors’ and their role in depression. What are these and how might they precipitate and perpetuate it?

What we know from studies now is that if people have raised levels of markers of inflammation in the blood, for example, they are more prone to develop depression over time. So that does imply that there is a relationship between these markers and changes in the brain.

Now, we still don’t really understand what the inflammation actually does and how it causes the depression. If we could work that out more, then I think that slightly different – and hopefully better – treatments for depression could result from that.

How does that sit alongside ideas of treating depression with antidepressants?

Antidepressants are effective in older people, although they don’t work for everyone, and they don’t always work terribly quickly either. There’s certainly scope and a need for much better treatments.

One leading hypothesis is actually that the inflammatory changes that occur in the brain reduce some of the levels of serotonin, one of the main transmitters thought to be reduced in people with depression. A lot of antidepressants work by trying to increase serotonin levels.

People with vascular change could be more likely to develop inflammation, and then that inflammation might then trigger changes in serotonin – so you’ve actually got a unifying hypothesis of why people become depressed from a biological point of view.

How does your work on depression and biology interact with the idea of environmental factors in later life?

Psychosocial factors are an important part of depression, such as adjustment to life changes, whether that’s retirement or the development of critical illness, or a loss of another life event. And we do measure them in some of our studies, but our focus has been on more biological changes.

This is partly because they’ve been neglected in previous research and there has also been an ageist feeling for many years that older people get depressed because “they’re old and it’s understandable”.

However, that’s not actually true. The evidence overwhelmingly supports the very opposite, that actually older people are, in many ways, very resilient and likely not to become depressed despite facing changes and adversity. I think the role of some of these psychosocial and environmental factors have actually been overplayed in the past.

Building Confidence in Mind and Body with The Dementia Swimming Project

Swim England’s Dementia Swimming Project is based around pool sessions designed to create a safe and friendly swimming environment for those with the condition. We talked to Karen Tremlett from Bristol’s Hengrove Park Leisure Centre about the importance of these special sessions for building confidence and activity.

Dubbed the ‘number one brain game’ and ‘chess on steroids’, table tennis could be the next big therapy for those with cognitive challenges. The Bounce Alzheimer’s Therapy (BAT) Foundation has created the world’s first therapeutic table and founder, Ian Craigton-Chambers, is passionate about the benefits of regular play.