Hearing loss in one ear

As we age we can be more susceptible to problems with our ears and hearing. In this guide, we look at some of the common reasons people experience hearing loss in just one ear. 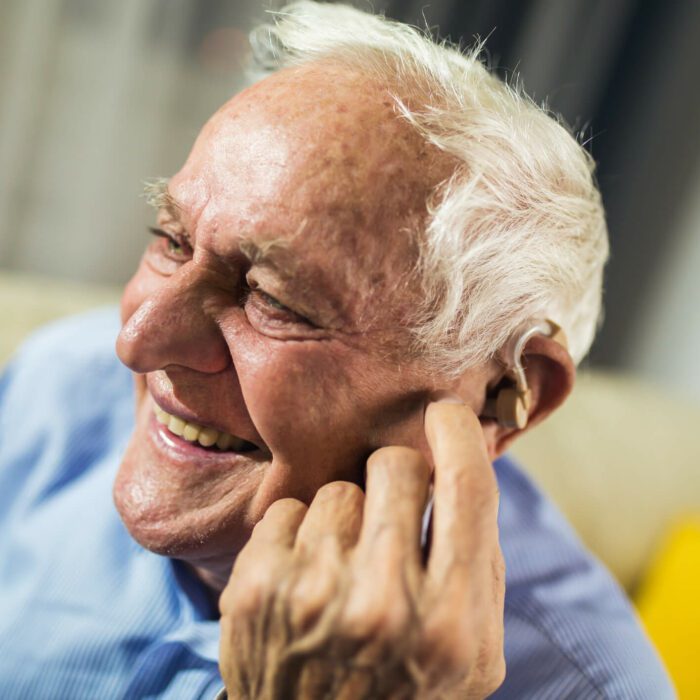 What causes hearing loss on one side?

There are many types of hearing loss that can occur as we get older. However, age-related hearing loss (presbycusis) itself usually affects both ears equally. Hearing loss on one side (sometimes called unilateral hearing loss) is more commonly associated with ear or head trauma or a temporary condition, such as infection.

Common things that can affect normal hearing in just one ear include:

Otherwise called a perforated eardrum is when a hole appears in the eardrum. It’s can be caused by a variety of things, including sudden loud noise exposure, loud bursts of noise close to the ear, an infection, or a sudden change in pressure, for example when travelling by plane.

The risk of hearing loss due to a burst eardrum can increase if you regularly use cotton swabs or cotton buds to clean your ears.

As well as loss of hearing, a burst eardrum may be painful and cause the following symptoms

Often a burst eardrum will get better on its own, however, it’s important to see your GP if you suspect you’ve damaged your eardrum, as they’ll be able to check for and prevent infection.

Ear wax also called cerumen is produced by glands in the skin of the outer ear canal. It usually helps to keep the ears free of debris, such as dust – trapping them before they get to the more delicate parts of the ear where they could cause damage. Old or excess wax normally falls out the ear on its own.

However, as we get older, our ear wax becomes drier, meaning it can clump together and create blockage inside the narrow passageway of the ear canal.

Using cotton swabs to remove earwax is something a lot of older people may do, however, this often pushes wax in deeper – making the blockage more compact.

A build-up of ear wax can result in muffled hearing, which get’s worse over time. It can also impact sound localization – meaning it’s hard to tell where sound is coming from.

An ear wax buildup may be treatable without medical treatment, and can often be removed by using ear drops for three to seven days. The most common are medical-grade olive oil drops, which lubricate the wax, or Urea Hydrogen Peroxide which dissolves it. You may experience a slight ‘fizzing’ sound if using the latter. Always speak to your pharmacist to work out which type of drops will be right for you.

Some older people may use ear candles to treat ear wax buildup. These are hollow fabric cones soaked in wax or paraffin, and it’s believed that lighting one end whilst the other is in the ear will encourage low-level suction, pulling the ear wax out. There is however no medical evidence of this method working.

Both bacterial infections and viral infections can occur in the ear, causing moderate hearing loss and pain. Whilst most common in children, elderly people can be susceptible to ear infections too, particularly in the middle and outer ear.

Middle ear infections are usually caused by a fluid buildup behind the eardrum. They can usually be treated with oral antibiotics or drops, combined with over-the-counter painkillers to treat any discomfort.

Outer ear infections, sometimes called Swimmers Ear can be caused by water getting trapped in the ear after bathing or showering which leads to a bacterial infection. Alongside antibiotics, a GP may prescribe a topical treatment or inflammatory, and advise you to wash the ear carefully a few times a day.

Again, risk factors for an ear infection include putting foreign objects such as cotton buds into your ear.

How hearing loss in one ear affects hearing

A reduction in hearing can be frustrating. Yet, for older people, it can be incredibly isolating or disorientating too.

Having two working ears allows us to pinpoint exactly where sound is coming from. People with hearing loss in one ear will often find it difficult to tell which direction a sound is coming from, which can make things like following a group conversation, or crossing a road difficult – especially in areas with a lot of background noise.

A build-up of wax or other blockages may make some sounds louder – for example, you may find your own voice when speaking sounds louder than usual, and start to speak too quietly or avoid the conversation altogether.

A build-up of fluid associated with infection may cause balance problems which can be an added risk for older people who are less steady on their feet.

How is hearing loss in one ear diagnosed and treated?

The above causes are unlikely to result in permanent hearing loss with prompt treatment, and there are several effective treatment options available that are minimally invasive.

While any form of temporary hearing loss can be frustrating it won’t always warrant a speedy solution. The degree of hearing loss and potential damage to the ear will usually play a part in the length of treatment. For example, in cases of earwax buildup GPs will usually always suggest using ear drops for at least 5 days first, as ear irrigation is not always risk-free.

For more severe causes of hearing loss that can’t be treated by a GP or at home, you’ll likely be referred to hearing specialists at a nearby hospital. A specialist will assess your hearing health in full to try and find the cause of your hearing loss. If the cause can’t be treated medically, they may recommend using a hearing device, such as a hearing aid. While they won’t help restore your hearing to how it was before, they can amplify sounds and send them more directly into your ear. This can make things like hearing the phone or joining in conversations easier.

When a hearing aid isn’t the best option, your Hearing Specialist may suggest a bone-anchored hearing system, which is a type of internal implant. Bone-anchored hearing systems treat hearing loss through bone conduction of sound vibrations to the inner ear, rather than amplifying sounds. They’re often suited to people experiencing conductive hearing loss – which is when the outer or middle ear is unable to send sound correctly to the inner ear.

What is sudden deafness in one ear?

Also known as sudden sensorineural hearing loss, a hearing impairment that comes on very quickly without any obvious cause. if you or someone you know experiences sudden hearing loss it should be treated as a medical emergency.

As it develops you may experience something caused diplacusis. This is a condition where you hear a single sound at different pitches – similar to if the sound you’re hearing has an echo.

Often with fast medical intervention single-sided sudden deafness can be treated and reversed. If it can’t, which happens in around 15% of cases, you’ll likely be offered a hearing aid to manage and balance your hearing.

More on hearing and vision 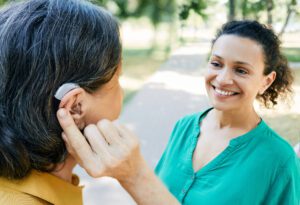 Signs, causes and treatments for the loss of hearing

Signs, causes and treatments for the loss of hearing Hearing loss is common as you age. Around 40% of people over 50 in the UK 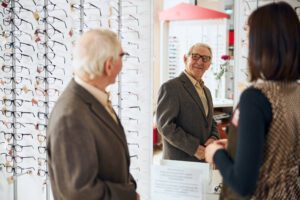 Vision Loss Care: What Causes Vision Loss in the Elderly? As we age, the quality of our vision changes. Some of these changes may be 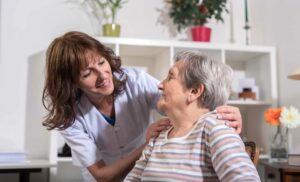 Vision Loss Care: How do I Care for a Loved One with Vision Loss?

Vision Loss Care: How do I Care for a Loved One with Vision Loss? Everyone’s eyesight changes as they age and few of us will