Living Words and The Power of Being Heard: An Interview with Susanna Howard

Living Words Founder Susanna Howard talks to us about the importance of “not being edited” and the power of being validated and heard. 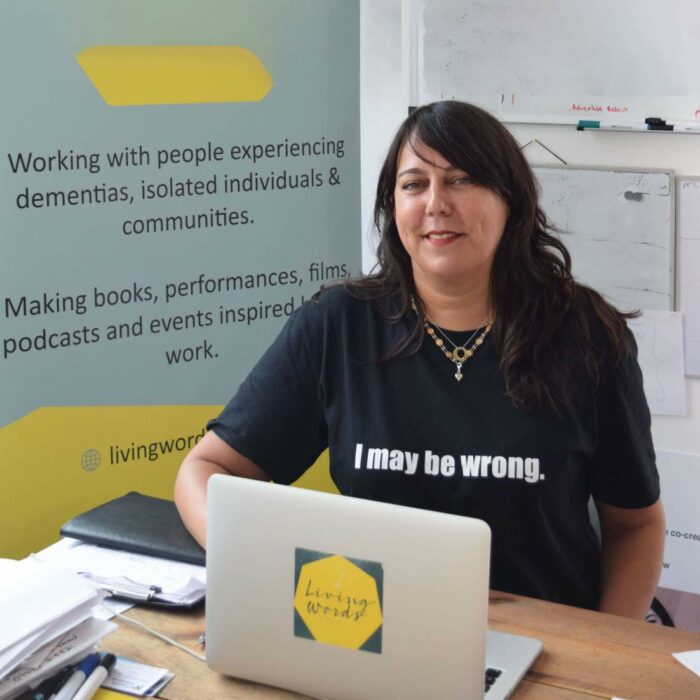 Living Words is an arts and literature organisation through which writers and artists work with those living with dementia, often in late-stage, to enable them to express themselves on the page. The aim is for individuals to feel understood even when traditional ideas of communication appear to be lost.

How did the idea of Living Words come about?

I had been through a traumatic period in life leading up to 2007 which had had an effect on my communication and had made me somewhat disassociated from myself. At the time I locked myself in my flat and wrote and wrote, just trying to get the words out of me without thinking – a process called ‘flow writing’.

Through that process I felt as if I was writing myself back into existence, or at least connection with myself, over a few months. And at the end of it I began to wonder how I could share this process with other people and help them.

A friend asked me to help him move furniture at Guy’s and St Thomas’ hospital for a dance performance. While I was there, I met the arts coordinator Catrin Jones and mentioned that I had an idea I would like to pitch to her.

"There are enough words in the world. Writers don’t need to take and change those of people who are living with dementia."

At that time, it was difficult to find artists to work with people living with dementia particularly late-stage – and she said she’d like to support a pilot at the hospital.

The aim of Living Words is to connect. I didn’t really know a great deal about dementia when we started, but it has always been about being non-judgmental around the sounds and words that we use to express ourselves to each other. It’s also about experiencing the joy of language, without it needing to be more than it is.

How can this kind of creative process positively impact people with dementia, and do they require previous writing experience?

People don’t need to read or write to take part. We all have the ability to express ourselves. When our experience affects the way we feel we’re “supposed” to use words, it can be amazing how metaphors and the ‘right sounding’ words instantly come out in these sessions.

The way we work is not about creating “poetry”, although some people do. It’s about how we express a person’s words on a page in the way that they’ve said them to us.

Recently I worked with a Nepalese elder who has never learned to read or write in Nepalese, let alone English, but she expressed herself in an amazing way. When she couldn’t remember the name of her mother, she said, “She lives inside me, I cannot bring my heart into my mouth”.

Of course, education is important, but we live in a society where we think self-expression is commensurate with that and it’s not. We have also been starting to work with people who don’t have dementia. If they think: “I’m going to be writing a book here,” or have all these notions of what “good writing” is, then it gets in the way of that person just telling their story.

How important is the relationship between the artist and the subject in the production of a Living Words book?

The book wouldn’t happen if either person wasn’t there. I worked with James Berry, an incredible poet and the first person to write in Jamaican dialect in the UK, for the last six years of his life. He was able to say at one point: “That thing you do with paper and pen – I used to do that.” If I hadn’t been with him, he wouldn’t have been able to continue to express himself through written language.

Is it crucial that people with dementia are not edited or “translated” by other writers?

A lot of people work with words and dementia in a wider way now and that is fantastic. However, much of this involves their words being taken away, then returned as something nicely formed. We don’t do that. There are enough words in the world. Writers don’t need to take and change those of people who are living with dementia.

When we work on a Living Words book, we are using our skills as writers, but the methodology is strict to ensure the experience is pure. We just write down the sounds and words that the person says to us and repeat them – building it out with applied improvisation. We never change anything around or try to alter any meaning.

When a person hears their own words back, they hear validation and they hear themselves. The process is also about connecting to our own sounds, as a lot of care homes are very quiet places because of many things. This even includes people who have decided to stop speaking or are fearful of what they’re going to say and how it’s going to be perceived.

"There’s still the sense of [people only being able to express themselves] ‘until I lose it’, ‘until I don’t make sense’…It’s part of a stigma against late-stage dementia in the wider care community."

However, we don’t want to give someone back a 100-page book, because then it becomes the “white noise” that their words are perceived as anyway. So, there is a gentle process at work. We are constantly reflecting, enquiring and ethically evaluating, because the purpose of the book is to help the person feel like themselves, and to help their relative or carer to connect to them.

Does this work impact positively on carers and family members too?

Creating a Living Words book affects the wider family as well as the person in question. It can often change perceptions of an existing relationship.There was a woman who was very quiet, and we had been told, as we so often are, that there was “no point working with her”. Her husband rang up three months after the project and said: “I’ve read the words with her, it’s completely her and she’s been responding to it. I’m sorry that I said what I did.”

In the new year, we’re also starting to work with people with late-stage dementia who are still living at home and their partner as well. Each person will have their book at the end of the process, so that the carer’s experience is being voiced as well, because often carers are overlooked – and both personal experiences are true and valid and what is going on.

Living Words is unique in the dementia writing space – how important to this is ensuring an authentic experience, rather than an edited ‘narrative’?

People assume that Living Words is going to be about their “story”, but actually people get beyond the point of reminiscence. We are constantly ‘becoming’, and our use of language and voice helps us do that.

It is really great how so many more voices and experiences are being heard with some of the work being done by organisations such as the Dementia DEEP network and Dementia Voices. Reinhard Guss has been at the forefront of that and he is now actually one of our trustees.

But there’s still the sense of [people only being able to express themselves] ‘until I lose it’, ‘until I don’t make sense’, ‘until…’ even within that community. It’s part of a stigma against late-stage dementia in the wider care community as well, which we have to deal with.

How have things changed since the start of Living Words and what would you like to see happen over the next few years?

When we started 12 years ago, a woman who spoke at an event said: “When Susanna said she was going to work with my dad, writing down words about how he was feeling and adding them to a book, I thought she was a crackpot. Then I found the book in his room and started reading it. He started joining in. I just dropped it on the floor, went to the loo and cried because I thought he was beyond that. Afterwards I continued reading the book with my dad.”

So I’ve gone from people thinking that I was a crackpot to them thinking, “Oh, we know what it is that you do”. In reality, it’s more nuanced than people appreciate, due to the prejudice against – and sometimes the infantalisation of – older people and those with cognitive issues.

Practically, I’d like to be able to have more artists locally in the South East and a few satellites across the country. We’d also like to produce a book that could be helpful for relatives and carers.

We looked into online courses to support people who want to do this work with a relative. However, with the ethical dilemmas around what is included in the person’s book, it feels as if they could face difficulties if we’re not there to support them.

We train our people with residencies. They’ll do half a day in a rehearsal room and a day and a half in the care home each week. They’ll do two residences before they’re even able to be there with one other writer, so it’s a time-consuming process. But the reason I’ve been hammering at it for so long is the difference and impact it makes.

Right at the beginning of Living Words I worked with a woman called Angela and when we finished she said to me: “Now you know two worlds; the one outside and the one inside me. And you’ve got to go and tell people.” This motivates me – and she’s really responsible for everything that’s happened since.