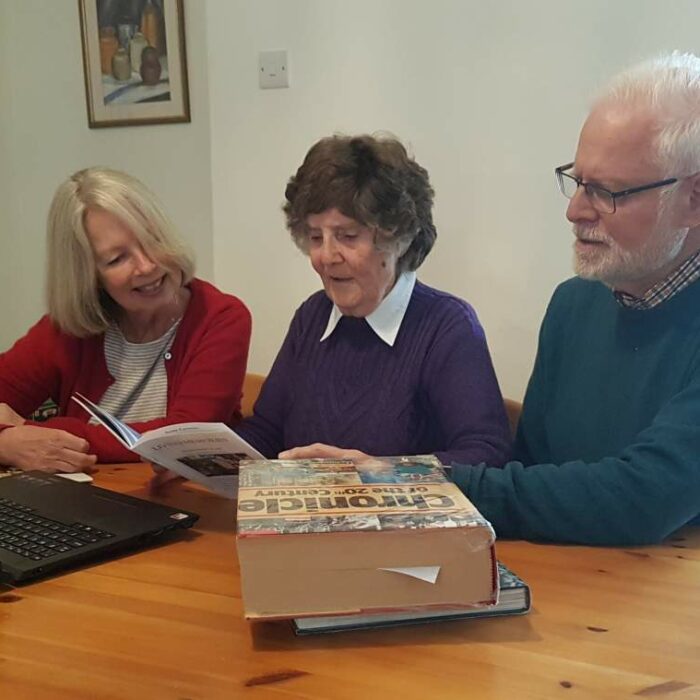 Living Memories is a not-for-profit social enterprise using an archive of social and industrial history programmes from the 1940s to the 1970s to create unique reminiscence tools for groups and individuals. Collecting key footage from different eras on DVDs, it aims to stimulate memories and conversation between peers – but also between carers and the people they care for. We talked to Living Memories founder Brian Norris about the power of collective memory, how the archive is opening up the past in a positive way for those in later life and how they are taking these memories into a digital future.

Where is your archive material from?

The archives come principally through a company called Greenpark Productions Ltd, which was set up in 1938 by Walter Greenwood who wrote “Love On the Dole” and many other novels. During the war, Greenpark Productions was producing government information films for the Central Office of Information, as it subsequently became. The company worked together with around seven or eight other production companies as a co-operative – the Film Producers’ Guild – producing documentaries and government films and sharing creative and technical facilities.

After the war, these companies all went on their own way and started working in the commercial market, while Greenpark Productions continued to do a lot of work for BP, Shell and various banks and blue-chip companies. Many of the other companies in the Film Producers’ Guild gradually went out of business and passed their archives over to Greenpark Productions for long-term safekeeping.

By the 1970s, Green Park Productions was the last company in the Guild, with an archive of programmes it had produced itself over the years and also the work of these other studios. Finally in 1977, an award winning documentary producer named David Morphet bought Greenpark Productions and added his own productions to the existing archive.

How did the archive come to be used for Living Memories?

In 1996 David semi-retired and moved, with his wife and young daughter, from London down to Cornwall with a plan to stop producing films and start looking seriously at how the archive might be used. But within a year of moving, he sadly passed away.

My background is as an international media lawyer and practitioner, and one of the things that I did was value film and television libraries and archives. I was asked to go to Cornwall and look at the archive of Greenpark and see what potential it had just before David passed away. His wife, Leonore, then came back to me months later to ask me again to look into the potential of the archive, which I then began to do…and years later we are still progressing to great effect.

"Obviously, it’s very important to have your memories of your own life – but watching the archive is another way of remembering the past. It’s a different approach to reminiscence."

We initially both lived in an isolated area near Bodmin Moor and began to understand that the friends we had were were getting older, some much older than us and as I now realise, were in the early stages of dementia. During this time, we would show them some of the films and they were fascinated because it took them back to their younger years and reminded them of things about their own lives as well. So we started considering how we could best start using the film archive for the benefit of the community.

Until that point Leonore had been keeping the archive going with income from licensing short sequences of films to the BBC and other independent production companies, but any money generated was going back into the company because of the preservation of the material. All film was originally on 35mm or 16mm print, which is expensive to convert to digital media. And also, when you’ve got all these cans of film sitting in a big building in the back garden you’ve got to make sure the rain doesn’t come in.

As we had some relevant film material we developed several projects working with local schools and one with Cornwall Records Office, about evacuees during the Second World War, and we trained up young people to sit down with people who had been evacuees or hosted them to interview them about their experiences. This eventually became an intergenerational project designed to be used in the classroom called asafeplacetogo.org.uk.

Around the same time, we got to know the person who was co-ordinating the development of Memory Cafes in Cornwall. She was interested in what we were doing and introduced us to the programme leader for long-term conditions and dementia in NHS Cornwall. We showed her several of our films and she was equally excited and asked us if we could do some research, going around the Memory Cafes and residential homes to see what response we got.

How did you decide to develop the DVDs and guides from the archive?

We then spent a couple of years doing this, sitting down with people and carers to see their responses, and in the end decided to do the Living Memories project with films on DVDs, because many of the places that we went didn’t have access to wifi – and there was no point in offering materials on the internet, as many of the people running these events were not technologically literate, and that kind of technology was a barrier.

We had also realised that many of the people working in care homes and other organisations are much younger than the people they’re taking care of, and often from other cultures too. As such, they might not really understand what life was like for people born here in the 1940s or 50s or know how to start a conversation that might stimulate memories. So we also decided to write reminiscence guides to go with the DVDs with questions that people could ask after watching each film.

In 2012 we sent our first guide and DVD out to about 80 different organisations to get their feedback and everybody was positive and said that they liked the idea very much. That convinced us there was a benefit to what we were planning to do.

We then had to put the project on pause until 2015 for various reasons, including a house move that meant we had to put all the films into storage facilities. It was early in 2016, that we really got back to pulling the DVDs and reminiscence guides out of the drawers and starting to move the project forward again, finally setting up Living Memories CIC a not-for-profit organisation.

How do you choose what to put on each DVD?

The films are predominantly from the 1940s to the early 1970s and the DVDs are organised on a topic basis and we have a number of them about the home and about different types of jobs. Some of the programmes that we have in the archive were originally information films. Before many people had television it was very popular for 16mm prints to go around the country and be shown in schools and other locations, and these films were often sponsored by a particular organization. So you could sit and watch a programme and only towards the end would you realise that it was related to a particular company or industry association.

One of my favourites is called Cotton Counts, about the cotton industry in the 1960s’ Manchester. It was filmed inside the cotton mills and showed what conditions were like for the workers and their children who attended the company creche, with black smoke belching out of nearby factory chimneys.

Your story tools are not related to people’s memories, per se, unlike many other reminiscence tools. What is the benefit of that?

Obviously, it’s very important to have your memories of your own life – but watching the archive is another way of remembering the past. Virtually every time we sit down with a group of people from a Memory Cafe or friends for example or in the Tea and Memories groups we run, people say, “Yes, I remember that reminds me of this, that and the other”. It’s wonderful hearing the excitement which comes out when they watch some of the films. One 82-year-old member of our Tea and Memories Group in Colyton, East Devon says that watching our films makes her feel young again.

"Many of the people working in care are much younger than the people they’re taking care of. As such, they might not really understand what life was like for people born in the 1930s or know how to start a conversation that might stimulate memories."

Or it might provoke a tear, not necessarily because people are unhappy, but because it reminds them of something significant in their lives. Family films could be upsetting for some people, because they’re watching something that is so intimate to them. What we’re offering is not better than anything they already have, but a different approach to reminiscence. And it also gives people the chance to do reminiscence in a group, which is interesting.

What are your future plans and aims with the archive?

We’re only now at the point of promoting and selling the DVDs and reminiscence guides nationally and I’m currently working on developing the Living Memories app based interactive delivery platform that is required for online streaming of our films and reminiscence resources. The NHS, for example, is very interested in the guides and the DVDs but has said to come back to them when we have our online delivery service ready. Although a large proportion of our users like to be able to request a DVD and put a cheque in the post, that won’t be the case forever.

Obviously the logical way to go is to be able to deliver our tools with streaming on a subscription and/or rental basis. So we are also in discussions with donors and social investment funders to enable us to do that and also to cover the cost of restoring and digitizing more of our 35mm and 16mm films as well to preserve the archive for future generations.

We are also just starting a partnership with a major national charity which will enable us to introduce our Tea & Memories groups around England and help to reduce the isolation of many people who live on their own and don’t go our very frequently. We are often seeing friendships being formed when people come to a group meeting and realise that they grew up in the same area or were evacuated to the same area during WW2.

To find out more about Living Memories resources or to order a DVD visit the website www.living-memories.net.