Why The PinkNews Ageing Summit Is So Important

Cai Wilshaw from PinkNews talks about the LGBT+ publisher’s first ever summit on ageing and the experience of later life. 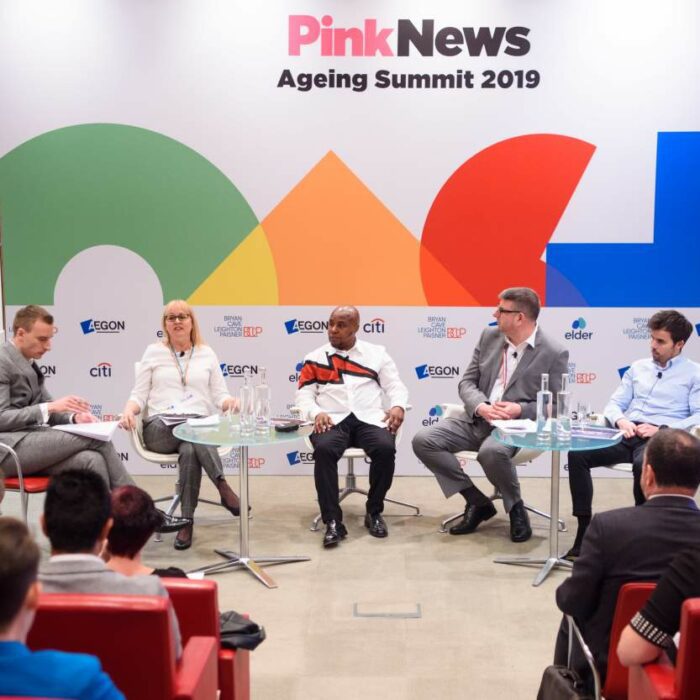 This week saw the first ever PinkNews Ageing Summit, sponsored by Elder, a conference designed to generate awareness and solutions to the issues faced by those in later life who are LGBT+. We talked to Cai Wilshaw, Head of Strategic Partnerships at PinkNews, about the unique challenges older LGBT+ people face and the positive power of bringing together different sectors to raise awareness – and start to move the dial.

Why is there such a need for a summit on LGBT+ ageing?

What we see at PinkNews, as the world’s most read LGBT+ publisher, is an increasing understanding that LGBT+ people from many walks of life face greater problems than the majority of the general population – and that includes in the later life space.

For LGBT+ people, ageing presents its own particular set of issues, due to the heteronormative nature of care and the greater likelihood that LGBT+ individuals will live alone and not have children.

There is definitely a growing understanding of some of the challenges in areas such as healthcare, charities and some parts of government, but the issue is that there isn’t really a way for all these people to talk together.

The PinkNews Ageing Summit is a way in which we can use our platform and our convening power to try and encourage that cross-pollination of ideas and solutions to some of the biggest issues facing older LGBT+ people.

Elder was one of the sponsors of the PinkNews Ageing Summit – how can partnerships like this benefit older people who are LGBT+?

At this event we looked at four different areas: social care, health care, financial and legal access and housing. Each of our sponsors brought expertise from their sector to the conference and we chose to work with them because they are really invested in these issues and are looking toward the long term.

In the case of Elder, the company’s work in social care and its innovation in the role of technology to help provide social care solutions is what we wanted to hone in on. CEO of Elder, Peter Dowds gave a great speech around the challenges and solutions in this space, including the importance of care being tailored to the individual as far as possible. Elder’s own process works to take into account so many different facets of someone’s identity and lifestyle when matching them with a carer – and that kind of person-centered attention is what’s needed in all care if we want to improve services for LGBT+ people.

What specific challenges do LGBT+ people face in health and social care and what interesting points came up for you in the summit around this?

It’s crucial to recognise that many LGBT+ people have a fear – and often experience – of discrimination, whether in healthcare, social care or purely in social settings. Because of that expectation they tend to self select out of areas of society, which means that they’re even less visible in their needs within the later life demographic.

Most LGBT+ people growing older now are of the generation that remembers homosexuality being criminalised; it was only 1967 that the law was changed. So they also often face the daunting prospect of going into a care home or shared living and occupying those spaces with the very people they were keen to avoid at a time when their sexuality was a crime.

That leads to many problems in terms of isolation and not being able to socialise in a way that is even more acute for the LGBT+ community, as many of them don’t have the benefit of having a family around them either – or might have lost friends in the AIDS crisis which means their social groups are limited. This is a challenge that both social care and housing share.

"Elder’s work in social care and its innovation in the role of technology to help provide tailored social care solutions is what we wanted to hone in on."

In healthcare as well there’s an issue around a lack of training for nurses and doctors in LGBT+ issues and Professor Dinesh Bhugra, the president of the British Medical Association, who delivered the event’s keynote speech focused on this.

In each area it was clear from the discussions at the conference that there are difficult issues that require a lot of different stakeholders to be aware of and get involved in. Many problems are not things that can be easily solved and we want to raise awareness and bring people together at the conference – but also actually give recommendations for actions that we can follow up on the next year.

How can you as a publisher use your influence to drive forward improvements in services and awareness for LGBT+ people in later life?

PinkNews’ calendar of events has grown in influence over the past few years through our recognition by high-level politicians; in the last two years of the PinkNews awards we have hosted speakers such as Theresa May, Sadiq Khan, Sajid David, Tony Blair and Jeremy Corbyn.

Our hope is that we can leverage that to bring awareness to others who might be able to do something about the issues that older people who are LGBT+ face, but also to government.

The PinkNews Ageing Summit is a way in which we can use our platform to encourage a cross-pollination of ideas and solutions to some of the biggest issues facing older LGBT+ people.
The portrayal of older people in the media is another issue that needs attention, as it is still pretty poor. In addition, both the LGBT+ community and LGBT+-focused media, perhaps even more so than the mainstream press, tend to overlook the intergenerational aspect of the community.

From a content perspective, I think our focus at PinkNews now will be around getting into some of those personal later life stories in order to really bring out the meaning of the conference and why this these issues are important.

Our audience is getting increasingly younger – we’re the only LGBT+ publisher on Snapchat for example – and we’d also like to remind them of the people who came before, and have done so much of the heavy lifting that allows us the right to live as we do these days. I would really like to see a focus in our stories on that intergenerational aspect – the young and old who all share this common experience of being LGBT+.

Do you think the experience of people in later life who are LGBT+ will change with the new expectations and attitudes of generations coming up?

A piece of research done by YouGov a few years ago asked people of all ages to put themselves on a scale of sexuality. It found that within Gen Z, broadly speaking 18-25 year olds, 49 per cent identified as something other than 100 per cent straight – which means they are on a spectrum we might define as LGBT+, even if they don’t choose to define it that way.

That perhaps reflects the fact that society is changing and people are able to express their sexuality and gender in more fluid terms now – and I think it will be really interesting to see what impact that has as these generations grow older, in terms of social policies in most Western economies as they relate to LGBT+ people.

These younger people also have a real understanding of different intersections of gender, sexuality and ethnicity and that shapes the way they look at the world – so this applies to all minority groups.

With the success of this year’s event, what are your aims for future ageing summits?

We’re hoping to make the conference an annual event – and we also hope that it becomes more than just a conference. We’ve already got some amazing ideas on what PinkNews can do in collaboration with others to make it a multi-level campaign, whether that’s creating content, facilitating more discussions outside this one-day event or bringing these conversations to government, where appropriate.

The aim is to have a role in changing some of the real problems we have at the minute in the older LGBT+ community. I would also like to see us moving away from having quite a London-centric view – and the assumption that because we’ve solved a few problems here that’s ‘job done’.

To that end, it’s important to share findings and ideas across borders. SAGE, the US’s premier LGBT+ seniors charity, attended the summit and that transatlantic perspective is so important, because America is in front of us in some ways. But as we develop here perhaps there will then be a way to share our best practice with other countries who are a bit earlier on in the journey.