We talk to CEO of Arts 4 Dementia Nigel Franklin about the power of the arts to challenge and inspire people after a diagnosis. 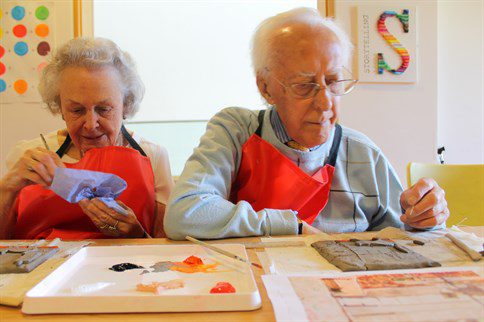 My sister Veronica founded Arts4Dementia in 2011 – the driving force was our mother, though, who was seven years into Alzheimer’s. She had been a very dynamic character in her life and at the time had got to a point where she wasn’t communicative. Veronica had a lodger at the time who was a Russian cellist studying at the Guildhall School of Music. He offered to come and play to my mother one day – and when he played Bach to her something remarkable happened. After he had finished, her communication skills returned – albeit briefly. She started interviewing him quite fluently about his life as a young musician in London. Veronica was so astonished that she gave up her art historical biography and began to research the use of artistic stimulation for dementia.

Veronica, who had always been concerned that our vibrant mother had always enjoyed the stimulation of live arts, discovered a lack of provision for people in the early stages of dementia. Most of what there was out there was focused on the later stages of the disease.

However, when people were coming to terms with diagnosis they were often desperate for some stimulation. It inspired her to action, so she set up Arts 4 Dementia, a programme that would deliver arts workshops for those with early stage dementia and importantly their carers too.

Typically, these would be eight-week programmes so people could make it part of their lives and held in all sorts of venues – partnering with major arts venues including the English National Opera, National Portrait Gallery, Tate Modern and the Imperial War Museum. The intention was to run stimulating workshops and to create a really engaging experience – so having these kinds of inspirational venues was important. Initially, the programmes were part of a pilot, which co-incided with the London Olympics 2012, where either we were funding it, or co-funding it with the venue. The key thing, we felt, was to show what was possible.

Veronica developed an early-stage focus to dementia awareness training and geared this for arts organisations, in conjunction with Dementia Pathfinders. This was to help organisations to understand different types of dementia and the needs of people in the early stages, when they still have most of their faculties. Importantly this kind of training also helps them to see the person and not the illness, and in this way they can deliver person-centric arts workshops. It has been a very successful part of our programme and we have now trained over 450 workshops and leaders. It’s so important to educate arts organisations in how to do this really well – as it is one thing to do outreach, but you have to do it well to be effective.

We encourage artistic stimulation across all sorts of art forms – we’ve helped run workshops in painting and drawing, dance, music, opera, printmaking and heritage in museums, for example. The important thing is that even years after the memory has gone the creative part of the mind can still be working well – for us, it’s about unlocking parts of the brain and the only limit really is the imagination of the workshop facilitator.

There is a question of whether people with dementia should be treated differently? And yes, being “dementia friendly” does indeed have to be a starting point. Dementia friendly doesn’t mean easy and patronising, though – it means training and implies something to do with signage and environment and certain practical expectations.

For us, though, the programme is about focusing on what people can do, rather than what they can’t and we’re interested in pushing boundaries and taking people out of their comfort zone. The aim is to set the bar high and to “blow them away” with that they are capable of doing, rather than adopt the more traditional approach of giving them easy things to do after diagnosis. It’s about changing the dialogue around dementia and the arts. We aim to challenge – but importantly we also make it failure free.

Artistic stimulation also provides great opportunities to increase wellbeing: you are part of a group, learning new skills and being stretched. We’ve had people says things like: “It’s wonderful, I feel normal.”

It’s often a challenge to get people with dementia to come, though – particularly those with Alzheimer’s. Apathy is one of the most common symptoms of this condition. Often, people don’t know that they want to come too – then they do, and they love it. Sometimes it’s the person, but sometimes it is the carer who thinks “ooh they couldn’t do that”. Once thing I have personally discovered is that nothing works to get people to events and workshops to try things like personal enthusiasm – whether that is from a clinician, someone who has been to an arts workshop or a carer.

Our programme is about focusing on what people can do, rather than what they can’t – we’re interested in pushing boundaries.

Providing access to the arts is as valuable to the carers as it is to a person with dementia. To quote a woman who came to a dance workshop: “I realised that since my husband’s diagnosis I’ve been there 1000 per cent for him, but when I come here I am doing something for his brain as well as mine.”

Arts workshops of all kinds offer chances for a joyful shared experience as well as an individual experience. Dementia is a degenerative illness so things will get even more stressful as time goes on, and there is great benefit in lifting people out of everyday routine together.

Before I became CEO I was a trustee of Arts4Dementia – Veronica has achieved a huge amount in championing workshops for early stage dementia and there are now more available than ever. It’s still a fragmented picture though and our challenge is to get the importance of the work across and empower people to know where to look for things.

One of our focuses is on listings, to enable people anywhere in the country to find arts opportunities near them. Our website is a place to find out about arts opportunities in the community for people with dementia – and conversely, if people are running them they can contact us for a free listing on it.

There is a lot of work around “prescribing for the arts” being done at the moment – and ultimately, our goal is to have clinicians and memory services engage with arts at the moment of diagnosis. We are working on having doctors refer people to these activities sooner rather than later – recognising the value of creative arts and taking a more holistic look at its role for people with dementia.

Arts workshops for people with memory loss and their companions are led by facilitators trained to override dementia symptoms and encourage participants to revive, develop and learn artistic skills joyfully together and are fascinating, fun and effective.

Arts 4 Dementia is mapping dementia-friendly arts and heritage venues and new arts events for dementia around Dorset as well as activities that can help prevent or delay onset.

To register your dementia friendly venue or event in the festival programme call 07713 63638.