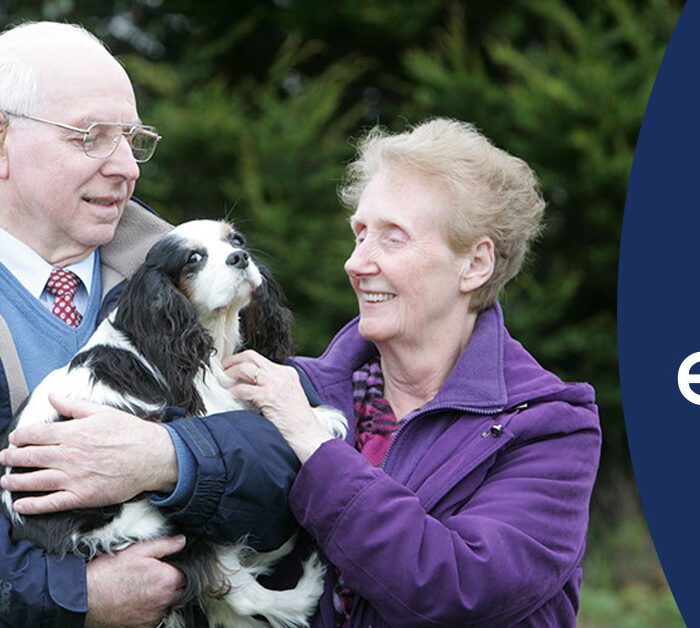 Dementia Dog started its life as a Glasgow School of Art service design project commissioned by Alzheimer Scotland and secured funding from the Scottish Executive and the Design Council after winning the Living Well with Dementia Challenge. It developed into a collaboration between Alzheimer Scotland, The Glasgow School of Art, Dogs for the Disabled (now known as Dogs for Good) and Guide Dogs UK, bringing together the teams’ expertise in dementia care and provision of trained assistance dogs.

The pilot, which began in 2012, concentrated initially on matching four dogs with families and the project is continuing to track their progress. We talk to project consultant Jeni Lennox, who has been with Dementia Dog from the beginning, about this innovative initiative and the powerful impact it is having on those living with the daily realities of dementia.

How did you find the families to participate in this pioneering project?

The selection process had practical criteria, such as whether they had a garden, and the size of the home – and everyone had to have a full-time carer living with them. We tried to identify people in the reasonably early stages of the condition, but it was important that they had fully accepted their diagnosis in order to work well with their dog. In pairing them up before routines had started to disintegrate, the dog had the chance to “scaffold” behaviours, providing vital support. A dog cannot replace someone’s capabilities, but can help someone with dementia maintain their routines for longer.

Is matching the right dog to a family crucial to successful assistance?

Absolutely. Each dog has its own personality and its abilities have to suit the needs of the family too. Dogs for Good led on this – they have great expertise in placing dogs with families, once they’ve fulfilled the basic criteria. One of the dogs actually played a part in picking one of the families himself – the team had initially gone to visit them with a dog that was intended for another destination. But there was an instant bond and the dog ended up with that family instead.

How are the dogs trained to help?

As the project at this stage was an initial pilot there is no breeding programme as yet for dementia dogs – so our canine helpers are all originally lab-retriever Assistance Dogs – who’ve had a “career change”. During the final advanced stages of their training, all the dogs were trained specifically to help with the challenges people with dementia face. The basic training of an assistance dog gives a good grounding in exemplary behaviour, for example to walk gently on the lead, and not to react to external stimuli.

This is extremely important as a baseline for someone with dementia. After their basic training the dogs skills are then specifically tailored to the individual needs of the person they will be living with, and this can involve all sorts of things. For instance, one lady had trouble waking up in the morning as people with dementia lose their anchor in time. So we trained the dog to get pull the cover back gently in the morning – he was a little enthusiastic with this so we had to adjust that to putting a paw on the bed to wake her instead.

One astonishing dog we’ve placed even makes his own jobs up, beyond those that he was trained to do, such as bringing his dad his slippers and the post. His dad has transient ischemic attack (TIA), where blood flow is interrupted to part of the brain, causing temporary stroke-like symptoms, and the dog will alert his carer if this happens. The dog also doesn’t let him sleep for more than 20 minutes in the day, as when he does he can’t sleep at night. He knows to plonk a toy in his lap at the right interval to keep his dad awake.

How can dogs help people living with dementia?

In dementia you lose your sense of routine – and dogs are great at keeping routines. The other key benefits are being a natural social connector when out and about, and also providing unconditional love and companionship for both the person with dementia and their carer too. We can train the dogs to respond to alarms for medication and hydration which also helps take the load off the carer. Helping to combat social isolation is another place in which the dogs can be of real help.

Our project participants say they feel less invisible; people see them with their dogs in their jackets, and come up and talk to them. The dogs act as an emotional anchor – but they can also function as a physical one too. In a supermarket, for example, a person with dementia can sit somewhere safe and they will stay with the dog – giving the carer time to go round the shop.

What do you feel is the most powerful gift of a dog to a person with dementia?

We all talk about the non-judgemental aspect of animals at Dementia Dogs. Having dementia can destroy the confidence of the person living with it. A dog doesn’t care if you can’t remember someone’s name or face. A dog is also often the first thing you see in the morning – and they’re always happy, full of energy and forward momentum, which is powerful.

At the core though it’s about affection; you see the bond between animal and human, and you don’t need logic or words for that to happen. You don’t need to be ‘top of your game’ for them to be devoted to you – and they don’t give a monkeys about your diagnosis. Pretty much the whole environment changes to a more positive tone with a dog around.

The Dementia Dog Project began in 2012 in Forfar, Scotland.

Assistance dogs are trained to provide special support for a person with dementia, such as:

To get involved or just want to find out more about The Dementia Dog Project www.dementiadog.org.

Do the Dementia Dogs have a wider impact on the family too?

People forget that in dementia there is more than one person involved; there is the person and there is the person that cares for them. The wider impact on family members and carers by the dogs can’t be underestimated. All our families have said that the dog coming to live with them has made a big contribution to dealing with transition – either after diagnosis, or if, sadly, if the person passes away.

In the beginning we were looking for things we could count, or quantify, to see and mark difference. One of the gentlemen had a thing about closing the sitting room blinds, which caused his wife great stress. We asked her if she could monitor the number of times he put the blinds down after his dog came to live with him. A month later we asked her if there had been any change. “It’s exactly the same,” she said. “But I don’t care any more.” And in that sentence is the seeds of a solution. The families we work with say that they can’t live without the dogs now.

Where is the pilot now, and how has it evolved?

The assistance dog model is up and running on the east coast of Scotland, and during the initial pilot stage we also piloted two other projects on the west coast too. . As it takes a lot of money to train an assistance dog we trialled a ‘visiting dog’ scheme at the beginning of 2015, where trained dogs provide individual goal-focussed therapy visits, working with 5-6 families each week. Within this we found the the families we were visiting really liked the day when they came together to meet the dog.

As a result we started holding “dog days” t Alzheimer Scotland’s dementia resource centre in Kilmarnock, designed for bigger groups, bringing assistance dogs and also “star” dogs, such as police dogs, medical detection dogs and we’ve even had a dancing dog along. We’ve had fantastic responses; people who don’t speak will end up chatting away, people who are anxious will end up with Therapet dogs (smaller breed animal assisted therapy dogs) sitting on their laps.

What’s next for the Dementia Dog project?

At this time we were the only project of this kind in the world; after seeing our work although the Australian government is now has since set up a similar scheme there though which we are consulting on. We also received more funding last year from the Life Changes Trust, which will allow us to expand with another eight dementia assistance dogs this year, and importantly it has also enabled us to take on a full-time project manager to help take the project forward.

What else would you love to see as the project progresses?

I would like to see the visiting dogs and dog events up and running – and I know that it is in the plan. I think the one-on-one assistance dog programme is wonderful, but there are so many people living with dementia in the UK – and making this kind of difference with 20-30 people at a time would just be magical.

If you are concerned that someone you know is suffering from dementia, or would benefit from full-time home care, speak with one of Elder’s experts about the peace of mind that comes from knowing that your loved one is in safe hands, 24/7.