We talk to Christina Macdonald about what inspired her to write her book and the importance of planning ahead with a dementia diagnosis. 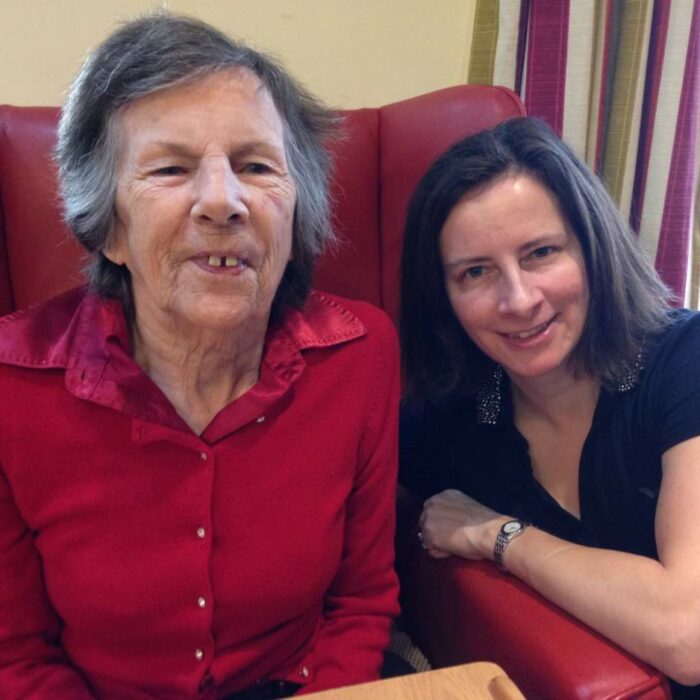 Christina Macdonald is the author of ‘Dementia Care: A Guide’. We talk to her about what inspired her to write her book and the importance of thinking and planning ahead when your loved one has had a diagnosis of dementia.

My late mother Hazel had vascular dementia for nine years. She was officially diagnosed in 2009 but looking back I can see now that she probably had it for a couple of years before that. When she was first diagnosed, dementia wasn’t really in the media and it wasn’t being talked about quite so much. The GP who diagnosed her said to me, ‘don’t leave it too long before you put things in place’ and advised I make arrangements for the future. She was given medication and then we were pretty much left on our own. I remember feeling very isolated and not knowing what to do next.

That was the main reason I wanted to write the book. I wanted to document my mother’s dementia and say ‘this is what I learned’ – this is what I experienced and this is what I did. Some things I got right, some things in hindsight I might have done differently. Every experience of dementia is different but there are common threads that run through it – it was a case of this worked for me, it might work for you?

I wanted to look at the whole journey of dementia in the book – from diagnosis to the stage where someone needs 24-hour care. It can be years between diagnosis and that point; what tends to happen is you start out feeling very lost – and the book talks a lot about planning ahead and coping day to day. In the beginning the person might just need a little help with meal preparation and things like housework, but they are essentially the same person. Gradually over time their needs increase and I talk a lot about the importance of anticipating this and thinking ahead.

If you look ahead then you can make choices in a calm and measured way, and hopefully be proactive and not have to make decisions reactively. It is a good idea to be thinking and planning from an early point – putting things into place like Lasting Power of Attorney (there are two – Property & Finance and Health & Welfare), which you should definitely arrange earlier rather than later, while the person still has capacity and can be part of the care decisions. In the rest of life, you generally have a plan – what you’re going to do, when and why, and it should really be the same here. But dementia is a very unpredictable illness so it’s not about being rigid and you do need to be flexible too – but it’s about accepting the situation and the fact it’s going to get more challenging.

The book starts by talking about the types of dementia and what they are – dementia just being an umbrella term for cognitive impairment, with different causes, such as Alzheimer’s disease. From there on it gets very practical; looking at everything from organising paperwork and keeping the person safe at home to what to do when things change, benefits and seeking legal help. The book naturally goes on the journey through dementia from early to late stage. There is a lot of information in the book that I didn’t know at first. For example, if you get a diagnosis of dementia you have a legal obligation to let the DVLA know – nobody told me that.

I also wanted the book to offer reassurance as well as practical guidance – the whole dementia journey is very emotional for everyone. You’re going through bereavement before it has even happened and although there are glimpses of the person you knew it is always changing. Writing the book was therapeutic, but I also felt strongly about getting the message across that people shouldn’t feel guilty for trying to do the right thing. As carers, we make choices that are incredibly difficult – but you don’t need to feel guilty if you are doing the best thing you can.

It seems like more and more people have a connection with dementia in some way now than they did perhaps ten years ago. I think there is still a common belief is that it just affects memory though among many people – I certainly had that view before my mum was diagnosed. And it’s understandable as it can be the most common and obvious thing you notice with your relative initially. But dementia also affects mood and behaviour. Mum was like this – laughing and happy one minute, and sad the next. Moments can come and go very quickly with dementia. We clashed a few times as she would say hurtful and upsetting things – and when you’re looking after someone and that happens you do think, “what is going on?” In most cases it is the disease, but even if you understand this, you’re still going to get days when it’s overwhelming.

I kept the book deliberately short because one thing carers don’t have a lot of is time – it’s not a big bible of care! But I want people to feel that someone else has been through the same journey. I struggled a lot with this throughout my mum’s illness. I had many well meaning friends who didn’t really understand the extent of the situation. They would say things like “You can’t put your life on hold” and “come out and have some wine!” and that was the last thing I needed to hear or do. To some extent I did have to put my life on hold – and I wasn’t going to put my mum second to anything. So that kind of naivety irritated me quite a bit.

I felt strongly about getting the message across that people shouldn’t feel guilty for trying to do the right thing.

I do strongly believe that carers must take the time to look after themselves though –studies show that you could reduce the risk of dementia up to 30 per cent and Alzheimer’s by up to 45 per cent by being regularly active. My other book is on running, which is one of my favourite forms of exercise, and has a section the physical benefits of running, including reduced risk of dementia – but it doesn’t necessarily have to be running as a chosen form of activity. Anything that makes you feel good and gets you a little out of breath will help you stay healthy – as well as helping you to let off steam and take some time out for yourself. A healthy carer makes the best possible carer.

My overall messages in the book really are don’t try and do everything on your own and plan ahead. I don’t actually think it’s possible to do everything on your own to be honest – and if for any reason you haven’t got family members that are supportive then seek out good friends or other people that can help. My husband was tremendously supportive when I was looking after my mum. It’s still a very difficult situation, though, no matter how much support you have. You need to have people around you that you can trust – that will pop in to see the person or have a cup of tea with them and keep them company. I also wouldn’t be afraid of using professional care so long as you do your research and choose a reputable organisation – sometimes the person’s needs are greater than the level of care you’re able to offer on your own.

Author Christina Macdonald is also the online editor for The Alzheimer’s Show, a national event for dementia care held this year at London Olympia on 9-10 June and EventCity Manchester on 23-24 June.

Dementia Care: A Guide (Sheldon Press) and Run Yourself Fit (Summersdale) are both available on Amazon.co.uk and in all good bookshops.

Christina has also set up an online resource for those looking for advice – Dementia Help which has help, advice and information for dementia carers to help them cope with their caring role.

This interview was part of a series brought to you by Elder, the company who can take care of all your loved one’s live-in care needs. Whether you are looking for live-in carers in London or require assistance in another part of the country, Elder will ensure that all of your care needs are taken care of.