Problems sleeping are common among those with dementia. Help everyone feel better with these simple strategies for a good night’s sleep. 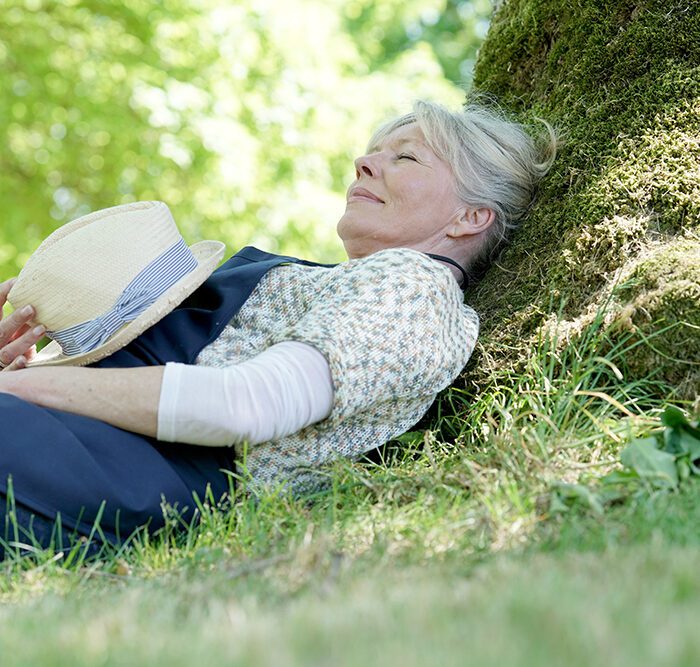 It is well documented that dementia and disturbed sleep go hand in hand. This common side effect of most forms of dementia presents significant challenges, both for the person who cannot sleep and for their live-in carers. If a loved one isn’t sleeping, chances are neither are you. Sleep deprivation affects mood, relationships, health and the way you perform at work.

Why are sleep problems so prevalent with dementia? Scientists aren’t yet certain. Yet they are clear that changes in the ageing brain start to throw the body’s natural body clock or circadian rhythm off course, typically during the mid- and later stages of the disease.

These changes manifest as different types of sleep issues, including taking frequent naps during the day, struggling to fall asleep, waking up a lot, and at the extreme end, staying awake all night, but sleeping through the day.

Those who struggle to sleep may find it difficult to lie still, call out, or worse, wander, putting them at risk of falls. They may need the bathroom, or they may be trying to get somewhere else specific, it’s just that it isn’t the right time. Naturally, this is distressing, both to experience and to witness. Installing a bed monitor that alerts your phone when they leave the bed or bedroom can help stop some of the worry.

One of the most common symptoms, especially for those living with Alzheimer’s, is specific to the late afternoon or early evening when it starts to go dark outside. At this time of day the loved one may start to show an unfamiliar display of anxiety, agitation, confusion or repetitive behaviours. Two thirds of people with Alzheimer’s are reported to experience this restless pattern, known as “sundowning”.

One of the main symptoms of sundowning is pacing. Resist any impulse to stop someone who is doing this, unless they are pacing somewhere where they may trip or be harmed in any way. Be there with them, a reassuring presence, to make sure they don’t injure themselves while taking care to not place yourself so close as to make them more agitated.

Some experts recommend engaging the person in a simple repetitive activity at the triggering time of day to help keep them more focused and calm. Helping with the dishes or cleaning up after supper, for example.

When it comes to the daytime, naps can be important for those who feel extremely tired because of their condition. One expert estimate suggests that in late stages of Alzheimer’s people spend about 40 per cent of the night awake and a sizeable part of the day sleeping. It’s good to gently limit naps to half an hour at most, and try not to let them happen in the late afternoon.

“Daytime naps are often caused by boredom rather than fatigue,” claims dementia specialist Professor June Andrews. “Exposure to daylight in the early part of the day helps regulate the body clock, so get out and moving together if you can.”

She adds: “Everyone has a body clock that is affected by the hormone melatonin that is reduced in old age and even further in Alzheimer’s. It is metabolised by exposure to daylight, particularly in the morning, so getting out during the day is really important if you want someone to be sleepy at the right time.” A walk to the shops or the park, or even a little dance to a favourite song can make a big difference. If this isn’t practical, do simple movement exercises from your chairs.

Professor Andrews is among a growing band of experts emphasising the importance of routine in reducing the symptoms of dementia-related sleep problems. As cognition and memory are increasingly challenged, structure provides a much-needed steadying force and a comforting steer towards familiarity.

“In the early stages of dementia it’s short-term memory that’s most affected, making it harder for patients to keep track of the day, or even what time of day it is”, reveals Dr Keith Souter, author of Your Guide to Understanding and Dealing with Dementia. “I’ve found that sticking to a routine helps keep someone with dementia better orientated, and gets their body clock into a rhythm.”

What was their daily routine before the onset of the disease? Most of us have had more or less the same getting up and bedtime routine for years. In the early stages, follow theirs as much as possible – for waking, going to bed, meals, hobbies and activities such as shopping. The more familiar the routine, the better they will feel.

This may not always hold true, however, in the middle stages of dementia. Routines may still be useful then, but the person may be more prone to mood changes. It’s important at this stage to be flexible.

Routine is important in reducing the symptoms of dementia-related sleep problems. As cognition and memory are challenged, structure provides a comforting steer towards familiarity.

Another practical step is checking the lighting situation in their room. Low-level lighting will help signal to their brain that it is time to go to sleep and stay asleep. Night lights may help the person safely find their way to the bathroom and back in the early hours, while motion sensor safety lights would switch on the lights only when needed. Consider putting blinds or blackout curtains up so that at night they can see that it’s dark and don’t need to get up. Light inhibits the production of melatonin.

Temperature is another key factor. The ideal, say experts, is a warm bed and a cooler room as this increases the likelihood of the person staying under the covers. Temperature aside, is their room peaceful? To be truly restful, the ideal bedroom is simply furnished and neutrally decorated, as well as clean, tidy and clutter-free.

Does your loved one enjoy music? Playing low soft music that they like at night may prove soothing. It’s important to let them choose what they’d like to listen to for a successful result. Timeless approaches like having a bath or shower, listening to the radio, or putting lavender or rose oil on their pillow may also be beneficial.

What other little touches can be done to comfort them at night when they may spend hours awake? A vase of their favourite flowers, for example, a photograph album, a crossword book or magazine?

Good old-fashioned hunger may also be an insomnia culprit. Is your loved one a bedtime snacker? If so, choose wisely. Foods with lots of salt or fat can stimulate brain waves and induce nightmares, says the National Sleep Foundation. Opt for whole-grain serotonin-boosting carbs and foods high in calcium or magnesium, such as banana, pumpkin seeds, cashews, or wholegrain crackers and peanut butter.

If, despite your best efforts, they still keep waking at night or experience sundowing, take heart. These are common symptoms of dementia, remember – around 40 per cent of people will suffer sleep disruption. Plus, they may be a part of a passing phase that reduces and settles in time. In the later stages of dementia people do tend to sleep more. If the issues persist, seek your doctor’s advice.