We speak to Dementia care expert, poet and author John Killick about his experiences working in care homes. 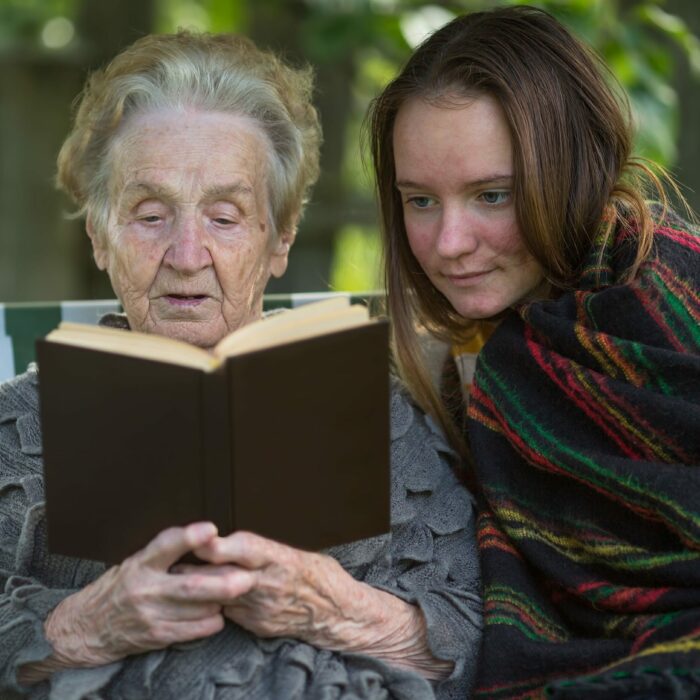 *John’s new books The Story of Dementia and Poetry and Dementia are out in August and November respectively this year, and continue his passion: to explore creativity and communication in the context of dementia. We spoke to him about his work, past and present.*

Why did you start writing about dementia?

When I gave up teaching full-time I began doing writing residencies, first in a women’s prison and then in a hospice, listening to the lives of residents and writing down their stories. A year in working for a private healthcare company and they asked whether I would do this with people living with dementia.

At this time, 25 years ago, dementia care was a little discussed topic. There was nothing really in the papers about dementia or on the TV and most people didn’t know anything about it. The healthcare company sent me to a care home where many of the residents had dementia and the manager said I would get “nothing out of anyone here”. But three months in, I had a meeting with the company, who decided I was onto something.

They made me a Writer in Residence and along with a grant from the Arts Council of Great Britain, I worked there for 10 years with those with dementia, writing their words down and sharing them back with them. Word got out about the work I was doing, and people started writing articles about it and it was even on the radio.

It was eventually picked up by Stirling University, where I then spent six years as a Research Fellow in Communication Through the Arts. My first book Communication and the Care of People with Dementia was published in 2001 by the Open University, and was a collaboration with psychologist Kate Allen – and since then I have written six more on dementia.

Are there any common themes through your books?

The common theme is communication – it has underlined everything I have written, from the first book to the latest. With dementia, communication is low on the priority list for many people – at the bottom, even.

In care home after care home you see it; people often getting little more than two and a half minutes’ a day to speak with another person. Most of the time care in such circumstances is very task-oriented.

People in their own homes have much more of a chance to communicate with family carers, but even then those carers are often at a loss as to how to do it, so they need a bit of help.

One of your books, Playfulness and Dementia, advocates humour for communicating with those with dementia. Is this one of the ways to help?

Playfulness is one aspect of that, yes. Even with people who still live in their own home, it all becomes so deadly serious and this is a problem that supporters of those with dementia come up against. The experience of dementia is often so fraught, and yet if we can be more playful we often find that people respond more positively.

Not everything is a problem to be solved. You can carry out tasks either in a serious or matter-of-fact way, of course – but people with dementia haven’t lost their sense of humour or indeed their sense of fun. You can make bits of the everyday a game – and why not?

Letting humour have its head can have unexpected benefits. ‘To truly laugh you must take your “pain” and play with it’ (as Chaplin said) – and there are plenty of examples in the book where people have injected playfulness into their communication to a positive effect.

As Elizabeth Cohen wrote in her novel The Family on Beartown Road, where the central protagonist looks after a father with Alzheimer’s, “I think that a sense of humour must be hidden very deep in the brain.” The idea that those with dementia don’t have a sense of humour is not really challenged – rather it is often ignored.

How can you include playfulness into your daily life?

Look out for any way you can create laughter, within reason. If something happens you can see it as a crisis or see it as the opposite and make someone laugh. And of course this is laughing with, never at the person with dementia.

People seem to think that there is nothing funny about dementia – of course there is. Everything about dementia can be out of the ordinary and if you turn your perspective in that direction the person will very often respond.

It’s is a gently humorous approach. It doesn’t necessarily depend on language either – it can be about movement or body language. People I have interacted with have lost their language and may not be able to get the humour of words but they can still understand the humour of situations. In some cases, we’ve just exchanged glances and fallen about laughing.

How essential is laughter for wellbeing?

Nothing is better than laughter to lift and relax. It releases endorphins, and there are many benefits on a holistic level. It’s certainly true that the more ground down in depression you are, the more unwell you are. If you can remain cheerful then you only help your health and wellbeing.

I am on a crusade to get people with dementia on the map as creative people worth taking seriously.

Is being playful a natural state?

I have an interesting theory – although I can’t prove it – that we were all born playful and we learn through play. So why not learn to cope with dementia through playfulness? We knock the playfulness out of people as they grow up; we say “life is serious and earnest” and we take tests and pass exams and “grow up”. With dementia here’s an opportunity to revisit the power of humour and playfulness.

Some people say it’s infantalising the condition – but it’s child-like to play, not childish. Its an important distinction. Being child-like is a positive quality, whereas being childish when you’re older is an insulting term. Many adults – both with and without dementia – have lost their inner child along the way.

Your latest book, the Story of Dementia, looks at pioneers in the dementia space. What inspired you to write it?

Nobody has written about the ‘story of dementia’ because we’ve only just started it really. It’s only in the past 30-40 years that it has taken hold as a condition that can be diagnosed, and we don’t have a way of predicting it or a cure – it’s still pretty much a mystery.

A lot of money has been spent on searching for a biological cure for dementia but I believe the root of it is multi-causal and lies partly in the way society has developed.

In this book I look at 12 people who have been influential in the dementia story so far. All the people in my book are those who haven’t followed the biological model – only one is medical, Dr Alois Alzheimer, who gave his name to the condition.

The medical side has dominated the whole story of dementia to date, so it’s a bit of a revolutionary book in that it takes a psycho-social approach.

It highlights some truly remarkable people in the field – from Mary Marshall of the Stirling Dementia Services Development Centre, who has been a bit of a polymath in dementia research, to people with dementia such as author Christine Brydon and experts in reminiscence such as Faith Gibson and Pam Schweitzer.

I also talk to a man in America who has set up an intergenerational school where people with dementia take classes alongside children and their peers and look at the “ethical approach to Dementia” with Julian Hughes of Bristol University.

Of all your books, have you a favourite one?

I think my favourite book is Poetry and Dementia which is the one that I have just finished. This is very much a “how to” guide – involving my two passions, poetry and dementia.

It’s a book that shows how to encourage and help people to write – and value what they do write. I’ve been a poet all my life – and I am on a crusade to get people with dementia on the map as creative people worth taking seriously.

All are available to buy on Amazon.

To find out more about John’s work and for a wealth of resources and information on creativity and dementia visit www.dementiapositive.co.uk

This interview was part of a series brought to you by Elder, the company who can take care of all your loved one’s live-in care needs. Wherever you may need a live-in carer in the UK, Elder can help.

We talk to campaigner, consultant and writer Beth Britton about the power of positive communication around dementia.

Remember the Great Outdoors? How one innovative charity is removing the barrier to adventures in nature for those living with dementia.

Problems sleeping are common among those with dementia – and inevitably those around them too, whether family members or live-in carers. Help everyone feel better with these simple strategies for a good night’s sleep.