We talk to Alex Rotas about her work, growing old in our society and how we can open up our minds to what’s possible as we age. 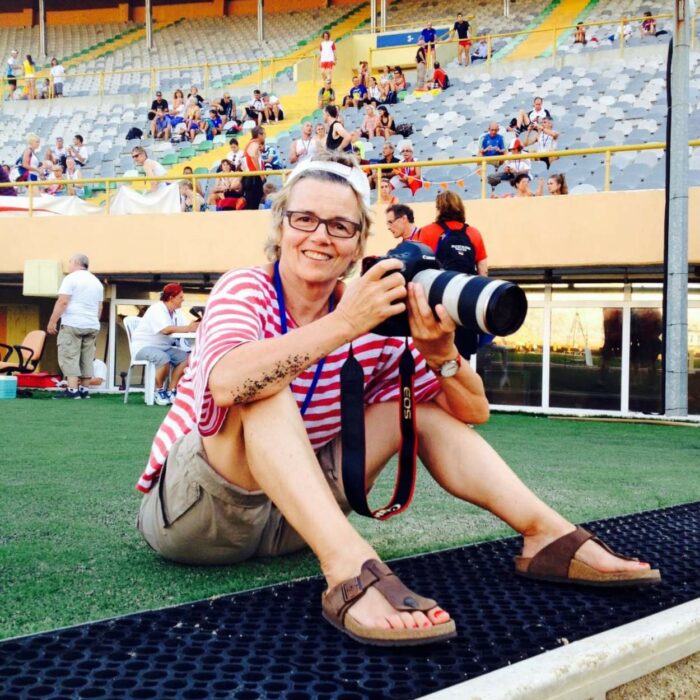 Through her groundbreaking photographic projects such as Growing Old Competitively, in which she documents older athletes, photographer Alex Rotas is challenging stereotypes of old age and helping to create a ‘new ageing narrative’. We talk to her about her work, the perception of growing old in our society and how we can open up our minds to what’s possible as we age…

What prompted you to start taking photographs challenging the ageing narrative?

I’ve done everything later in life and in my 50s I gained a PhD in Visual Culture, where I became familiar with critiquing imagery. Seven years ago, I did a Google search about sport and older people to see what came up. I thought I might write a paper on it.

Results from the search included old people slumped over, in a care home – archetypal things like that. There weren’t any older sporty people retrieved, even though from my experience as a sporty person myself, I knew they were out there, but there was no evidence of them in the imagery, no documentation. There was a real gap, and so I decided to fill it.

I didn’t know anything about photography at the time, so I found a tutor in Bristol and she took me from a standing start. I was very clear with what I wanted to do, which was to take sports pictures. And that in itself was an ambitious ask, in terms of photography anyway – sports pictures involve movement a lot of the time.

I jumped in with sports such as hockey and football and the Growing Old Competitively project was born… I even photographed the World Skydiving Championships last year, which was full of competitors in their 70s, right up to the age of 85.

What is the mainstream ‘ageing narrative’ – and how can we combat this as individuals?

In my university lectures, I always ask my students what connotations the word ‘elderly’ has for them. Answers are inevitably always frail, passive, weak, a bit doddery – and just so full of negativity.

I think we internalise ageism in our society and this starts young, almost from the first fairytales you read that have old crones or passive grannies in them. When I looked at these images of older people in my Google search, I was shocked.

In terms of power, you can’t become what you don’t see. And if you don’t see older people being active, you’re not going to think that you can be. These depressing, moribund images are the kinds of images that saturate the mainstream.

You also have these ghastly ‘elderly people crossing’ signs, with two people, one carrying a cane and the other humped over – and I’d like to personally campaign against the birthday cards you see everywhere that make fun of old people with their jokes about getting old, being past it, or mishearing things.

If you are surrounded by this kind of imagery and messaging, then popular culture can get to you. You’re bombarded by it, no matter what age you are. It’s insidious. To start to combat it, I think it helps to have an ageless mindset yourself, but it’s tiring to have to fight this.

You’ve got to object to it en masse to change it. And it will take time to do this – ageing well is a relatively new thing. Pre-modern medicine you probably didn’t get to ‘decline’, did you? The arc of the older person was different.

Why do you think there is such negativity around ageing?

There are many reasons I suspect. But I wonder, is it fear? Fear, after all, is what makes news. Keeping age as something to fear creates a market for products, from pills to beauty stuff. Fear creates marketing opportunities, after all, and we need difference to make the market capitalism we live in, work.

To constantly see age as something to “put right” is quite effective. Or perhaps when you are in your middle years – in your 30s and 50s – you need to feel your own power and control still and not object to these kinds of portrayals.

There was a piece in a newspaper recently about the film Hampstead, which is a sort of older-age Rom-Com and it said that the “silver pound is ruining British Cinema”, alluding to the run of films like the Best Exotic Marigold Hotel etc. that depict older people and their lives. Messages like that are amazingly divisive, it pits the old against the young. And this is a massively important point – because really, we’re all on a continuum from young to old, not two separate species.

Are things changing for the better at all?

There are changes, for example, people doing wonderful things with children’s books now, to change the whole narrative. But the old fairytales and references in popular culture do go on and on. We have to move on from this though. It would be great to get to the point where we don’t have to compartmentalise photos of “older people doing athletics” and mention their age at all.

However, I think we have got to go through the ‘highlighting the age’ thing at the moment in order to change the narrative and then to normalise it. Things do move on though.

I noticed a few years ago that Radio Four were quilty of this, if they had a play that was written by someone from the Indian subcontinent let’s say, they would flag up the author as an “Indian writers” and the play as part of a “multicultural series” – but they’ve stopped doing that, which is interesting, and now they just introduce the writer and the play.

What effect would improving the perception of ageing be in society and for individuals?

It would normalise the fact that you can still be doing interesting things as you are older. It will also help to get rid of the vertical hierarchy of young and old.

When I was at university as a youngster, we didn’t talk to the so-called ‘mature students’, even though, looking back, I can see that they were only in their 30s.

There was a real split and we all stuck to our age groups. I don’t think this would happen so much now, which is great. I want to celebrate ageing and all the positive things that can come with it – like not caring what other people think so much, which can be very liberating.

If your health holds and once your children have left home, then you have time in later life to do things you’ve always wanted to. Although this too is individual; I would hate to say what people should be doing, especially if they’ve spent their lives in a hard job and now want to enjoy being in the garden or walking on the beach – and it’s important that idea is not prefaced with the word “just”.

I haven’t got the energy I once had – but I do still have lots of it to do things. I am an active older person; I was a tennis player when I was younger I played on the circuit. I took up running at 65, three years ago, because the older athletes I was photographing kept telling me I should start.

They would ask me how my training was going and they would never laugh or giggle at me, which is another mistake that younger people can make. I find it interesting when people, women particularly, who hit 50+ say that they feel invisible, and I question that. I don’t feel invisible, I feel I am making more connections than I did when I was younger because I feel I can chat to anyone more easily now. And finding out this about yourself can create a new image in yourself that becomes the opposite of a vicious circle. It’s nice!

What are you working on now and what are your plans for the future?

Recently, I’ve been photographing the REACT project at Bath University, which works with older adults at risk of becoming disabled because they are immobile. There is a huge emphasis on the fun, social side of it all. What struck me is that you can get similar photographs here, as you can with the elite older athletes.

The people in the REACT project might be doing exercises sitting down with yoga bands – but you can see the same determination and exertion on their faces as you follow them through the exercises.

When people’s faces have determination and exertion on it – or laughter through the camaraderie – they start to look young again. It’s blankness that is just so awful. In the same way, older people are seen as less able and you don’t expect them to be physical, and yet they are.

Whatever age someone might be or whatever condition they might have, what matters is what they experience, and if you can capture the laughter and joy then that is what life is about. It’s truly a life force, released.

This interview was part of a series brought to you by Elder. Whether you are looking for live-in care in London or require assistance in another part of the country, Elder can help.

Alex Rotas challenges stereotypes about ageing through photography, speaking, writing and getting old herself. She loves tennis, swimming & running and is an England Athletics 2017 #RunTogether Ambassador.

To find out more about her work or to hire her as a motivational speaker, visit her website alexrotasphotography.co.uk

Remember the Great Outdoors? How one innovative charity is removing the barrier to adventures in nature for those living with dementia.

The Ally Bally Bee Project is the world’s first personalised children’s book about dementia. The project was developed by the Äikäs-Adams family, who wanted to create a resource that could help adults to explain dementia in the family to small children.